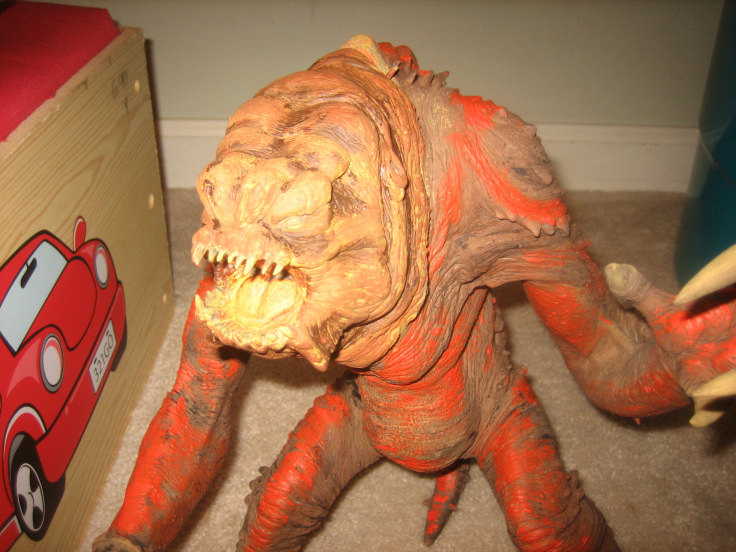 I’ve always been a Star Wars fan, saw the movies, owned the toys, read the novels, played the games… But my interest in the franchise took a big nose dive after the prequels. I didn’t lose total interest, but any visits I made to the franchise felt like a guest appearance rather than a recurring role.

That’s why it’s a bit surprising that I’m neck deep in Star Wars at the moment. Between the two models I have going, Disney buying up the franchise and promising new movies and playing Star Wars The Old Republic on a nightly basis, I’m getting daily doses of the Force.

First up, the Rancor model. It’s moving along nicely. It took a bit to get me motivated to sand a fill. Sanding filler is the worst job in the world. Even on a model that hides it’s seems well and really shouldn’t be that hard to fill, it’s a chore. But it’s done and I’ve airbrushed a base coat of brown and yellow, and I’ve started the painting process.

I have no idea how other figure builders do their painting. But I layer on different colors, by dry brushing and using washes. I found these style paint jobs just fun, relaxing and they kind of take care of themselves. No masking, just dab and swipe. There really isn’t anyway to make a mistake. But it does utilize everything I learned in color theory class.

I figure I would post pics as this thing evolves. It should be interesting checking out the before and afters.

Next up, Vader’s Tie Fighter. This is one of the AMT kits from the mid to late ’90’s. A reissue of the original kit from back in ’78. Damn, the fit on this thing is atrocious. It’s what I hated about building the American model kits when I was a kid. Huge gaps and panels not lining up. To be fair, this kit was built to be cheap. A disposable toy for the kids not luck enough to have the money to afford a Kenner Tie Fighter.

That’s all for modeling right now. Now on to gaming… If you haven’t tried it, give Star Wars The Old Republic a try. It’s a free to play MMO and really addicting. 🙂 If you do, look up CprlGiroro on the Shadowlands server.